Mike, a young hired hand in California is working a small farm with a close friend, Dan. Mike is content on the farm and obviously attracted to the handsome Dan. Dan seems to be attracted to Mike as well but is a drifter and not happy as a farmer. He longs to finish out the contract and move on to a big city, perhaps with Mike. Gary, a boy from the next farm over, befriends them during their daily chores. Gary lives with his abusive father, a stepmother and a stepbrother. Gary is drawn to the camaraderie of the young farmhands in part to avoid his problems at home. When an innocent session of skinny-dipping is misconstrued by the boy’s father, the young hired hands soon find themselves unjustly suspected of wrongdoing in a suddenly hostile small town.

Yes, there are obvious flaws: sometimes the acting is a bit stilted (especially the boy who is so enamored of the two “clay farmers.”); and, yes, the townsfolk and the “villain” came directly from central casting, but this film manages a real depth of feeling with great economy. The leads, especially Todd Fraser ( Dan), are excellent. The feeling that grows between the two men is obviously homo erotic; in fact, I think they are very clearly in love. But it’s the accusation of just that fact upon which the whole movie turns. A lesser film and lesser writer would have drowned in the cliché. This film doesn’t do that because the characters remain who they are, and self knowledge comes at a price. Their frightened silence (well, Dan’s silence) becomes devastating.

There are some real surprises here, too, that lift the plot above the ordinary. This is definitely worth seeing. 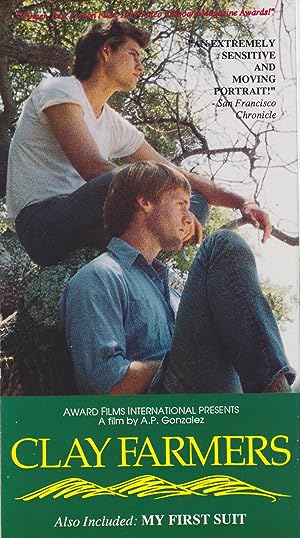