Daniel and Ana 2009 with English Subtitles

Daniel and Ana, brother and sister, best friends. Both are at pivotal, defining moments in their contented lives. Ana is about to be married, Daniel is a gregarious teenager discovering his personal and sexual identity. Yet their harmony is instantly shattered when they are kidnapped and something shocking happens which forces them to confront their desires and fears. Suddenly their old lives are a distant memory. Now, nothing they have known will ever be the same again.

DANIEL & ANA is based on a true incident, and reveals a relatively unknown aspect of The Porn Industry. The thesis of the film is that, especially in South and Central America, some individuals engaging in online pornography may not be willing participants. Although the film is darkly bleak and disturbing, it presents an unfortunate aspect of human behavior. If an individual has been subjected to extreme sexual or psychological horror, they might not react in a way that one would ordinarily expect. I think that many people who have commented on this film have failed to recognize this important fact. The behavior that Daniel engages in after the event, although wildly inappropriate, is not in any way out of the realm of possibility. Post Traumatic Stress Disorder is not easily ‘cured’, or even understood, and can cause significant impairment in all aspects of human functioning. 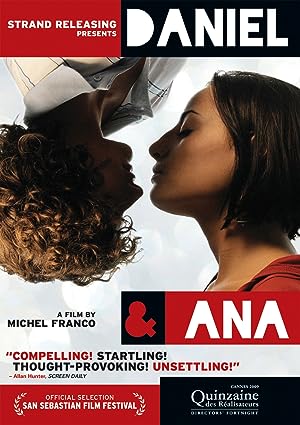