Five extremely disturbed, sociopathic children escape from their psychiatric transport and are taken in unwittingly by a group of adult villagers on winter vacation.

This is also know as peopletoys 1974

Being a horror fan , I am so shocked that I had not seen this movie before!

This movie as to one best killer kids movies of all times ,

I actually thought was really good and shocking , well for time

The movies about fives kids wondering around and find the place (all mixed age and everything) there are acting very strange for most of the movie,

The acting from kids were great, I actually thought were really were scary to watch.

The end was chilling at end, how done and dusted and played and want to movie on to next! 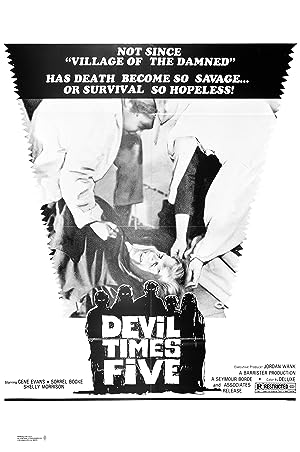 Be the first to review “Devil Times Five 1974” Cancel reply