Shy and withdrawn, Nathan (played by Stephan Bender) is new to his school, unusually smart (a grade ahead) and the silent tension at home nearly unbearable. Mom, Dad, and Nathan have moved constantly, town after town, landing, inexplicably, in god-fearing “St. Francesville”. Roy (played by the multi-talented Max Roeg), a year older than Nathan, confident and hard-working, drives the bus to their school while a friendship blooms between them into a relationship that is fraught with confusion and yearning. But secrets pick at the relationship, the unspoken rules of their angst-driven interactions unravel as Nathan’s world again comes crashing inwards. Tension crescendos as shame and terror, stress and disaster all compete to immobilize and destroy both of their worlds.

I thought I would like this film based on the first half. Then the story goes downhill like a runaway pickup truck. I can’t help but think of “The Mudge Boy” (and “Fishbelly White”) which also starts out with a lot of potential but the writer puts in a story arch that ruins the tale and turns what could be a good experience into a downer.

The two lead actors were very good in their roles and the photography is lovely. The music was often annoying. This may have made a better short than a feature-length film with a rewrite of the turn of events. If it’s a tender love story you want, don’t watch the second half of this film. And the title “Dream Boy” is completely misleading. The film is based on a novel which I haven’t read but if the stories are the same, neither should be called “Dream Boy.” 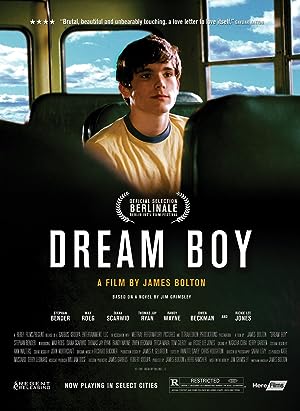