From National Lampoon, the masters of raunchy comedy, comes a summer tale of beers, babes, and bros! In the surf town of Ventura, California, JD’s surf board is stolen by a surfer from Los Angeles…a crime that cannot go unpunished. Gathering his friends and the local surf hero, Mike Mooney, they take a road trip to LA to get the surfboard back, then return to Ventura for the wildest summer party ever!

Motion Picture Rating (MPAA)
Rated R for pervasive language, drug and alcohol use by teens, and some nudity

Take this movie for what it is. A snapshot of what life was like in the 80’s in a suburban Southern California beach community. The correct approach is to soak up the feeling it evokes not rip the plot up. The plot isn’t the point. Granted, it may not be a period piece many are interested in but it is accurate depiction of lower middle class life was like at that time with a lot of silliness mixed in. These are kids from single-family non-attentive households, not aspiring to anything beyond they know outside their little universe of beaches, girls and recreational drugs. It also shows how a gang mentality begins. These surfer kids were each others family and were very territorial. In this case a kid from the “Valley” (San Fernando Valley) was trespassing and stole one of the local kid’s surfboards triggering a manhunt to retrieve it. No plan, no strategy, no thinking three steps ahead. In other words exactly how teenagers behave and think. It’s lucky they were able to film in a place that basically hasn’t changed in 20 years. 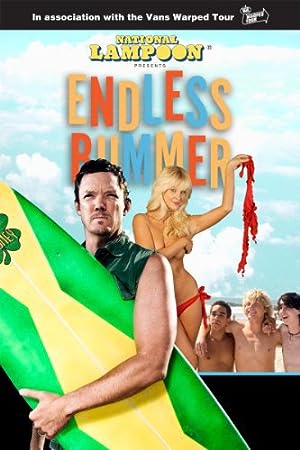 Be the first to review “Endless Bummer 2009” Cancel reply