Always inseparable with his beloved and joyful young mother, 9-year-old Massimo, now has to endure the tremendous blow from her death and the insufferable burden of accepting his loss. But no, this can’t be true, his mother could not have died of a sudden heart attack, moreover, she simply cannot be his guardian angel from heaven, because Massimo, strongly believes that his vital mother is very much alive, temporarily residing in the United States. As the years pass by, profoundly traumatised little Massimo still refusing to accept the tragic event, he will silently continue carrying grief’s heavy load on his shoulders, growing up to become a distant and detached journalist who chose to shut down his emotions, not out of revenge, but in order to survive. However, inevitably, after the death of his father, Massimo will need to confront his past in the very source of his persisting anguish, his house, react to the pain, refuse to be a victim, and ultimately, face courageously a well-hidden truth that was kept in the family for over thirty years.

Marco Bellocchio is superhumanly prolific; a member of a very small group of directors who turn out a film about every year. Granted, they range in quality, but he’s undergoing a personal renaissance, with his most highly regarded work coming in the last decade and a half. Those film, Good Morning Night, Vincere and Dormant Beauty, are loaded with a rock-solid sense of time and place, coupled with an emotional heft that largely avoids sentimentality.
His latest is Sweet Dreams, an adaptation of journalist Massimo Gramellini’s autobiographical novel Sweet dreams, little one. The book and film are an extensive meditation on grief, loss and mourning – following the life of Massimo from childhood to middle age as he struggles with his mother’s suicide.
Set in Turin, much of the action takes place in the Gramellini family flat, situated a stone’s throw from Stadio Olimpico Grand Torino. The flat becomes an ersatz mirror of Massimo’s mental condition; initially a place of love and happiness and ending up as a dusty, half abandoned ruin. Watching time gradually erode the place is fascinating, though Bellocchio avoids the onset of claustrophobia by frequent plot excursions to (among others) bangin’ raves, bustling newspaper offices and, most impressively of all, the 1992 siege of Sarajevo.
Throughout the shifting scenery, the lens keeps a steady lock on Massimo’s psychological development. His mother’s death becomes the proverbial pebble tossed into a still pond, the ripples reverberating around his life. Elements from his boyhood, like a fixation on TV supervillain Belfagor, pop up in his thirties, and we witness the development of his growing passion for Torino FC and his skill for clear, no-frills journalistic writing.

Massimo’s rhetoric-free writing style is frequently praised in the film, and Bellocchio tries capture this in dialogue and editing. The result is a steadily paced, traditionally shot, confident piece of filmmaking. Absent are the woozy mystical long shots from his last film, Blood of My Blood, being replaced with a focus on close-ups, most notably on the craggily emotive face of Valerio Mastrandre, playing the adult Massimo.
Still, the languorous plotting doesn’t exactly make for propulsive cinema, as Sweet Dreams largely eschews surprises in favour of watching people gradually realize things. Part of the problem is that the audience has the benefit of the god’s eye view and is generally way ahead of Massimo. Waiting for him mournfully catch up with what we’ve already worked out isn’t exactly boring, but it renders the film occasionally inert.
It’s especially frustrating given that there are genuinely wonderful sequences peppered throughout. Most obvious is the Sarajevo scene, with a constant background crackle of small arms fire. You sense that something sudden and awful is about to happen (the woman sat next to me spent these scenes with her hands over her ears in anticipation), yet Bellocchio zeroes in on a still-life tableaux that neatly summarizes the film’s themes (I also appreciated the prominent role of a Sega Game Gear in it).
It’s also always nice when Bérénice Bejo turns up in a film and flashes that million watt smile at the camera. Bellocchio shoots her to mirror Massimo’s mother, and her straightforwardly upbeat charisma goes a long way to warming up an often dour cinematic experience. She also plays a role in a simple yet hard-hitting scene where Massimo watches her diving into a pool. It’s in this silent, short scene that everything comes together. It looks great, the sound design is fantastic, the performances are spot on and it thematically hits you like a punch in the gut.
It’s such a shame that this moment is quickly undercut by one of the most syrupy things I’ve seen in a while. It comes after Massimo is press-ganged into dealing with the newspaper’s advice column, leading him to pen a paean to the importance of loving your mother. Well, fair enough, but here the film floors the schmaltz accelerator and sets a course for sugartown. Not only is it overly manipulative (we sit through a montage of weepy commuters reading the paper), but it simply doesn’t fit with the otherwise relatively sober treatment of unresolved grief. 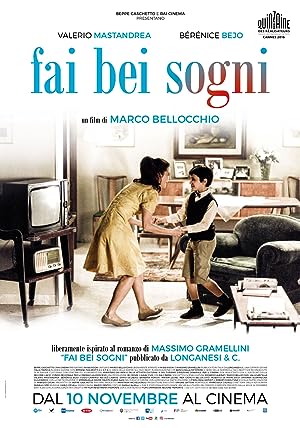