College boy “Doc” is obsessed with a well-known NYC go-go dancer, nicknamed “Go.” He befriends his hunky crush under the ruse of shooting a movie about what it’s like to live in his skin. Camera in hand, he follows his subject across the city – into bars, onto rooftops, over dance floors and, ultimately, into his bedroom – but as they grow closer, flirtation blurs the line between subject and filmmaker until a steamy night together solidifies deeper feelings. Cory Kruekeberg’s explicit directorial debut explores the thrill and danger of getting exactly what you wish for.

A gorgeous, early-20s gay virgin in Manhattan (if you believe there ever could be such a person), just about to graduate from Columbia and then west to Iowa for grad school, fakes a documentary film project in an attempt to meet a gorgeous gay go-go dancer he’s become obsessed with online. To his surprise the dancer goes along with the idea. The fake documentary leads pretty quickly to some very real sex and a lovely, tender, sort-of relationship.

Actor and singer Tanner Cohen, the star of Were the World Mine (made by the same guys who made this one, but MUCH different), plays Doc, the almost-Columbia-grad virgin. Matthew Camp, a real live go-go dancer, plays Go, who is actually himself. The movie was shot in Camp’s own apartment, gym, club, supermarket, etc, and follows his regular daily and nightly routine. The only fiction is the business with Doc.

From beginning to end, nothing about this movie is conventional or predictable. Unlike 99.9% of gay men who see this, I thought Doc was lots sexier than Go, but the nerdy type with a totally natural body appeals to me lots more than the buff, shaved, go-go boy type. But Go is very smart and has an angelic face, and inside he’s ten times sweeter and more appealing than Doc is – one of the sweetest and most appealing characters ever to appear in a gay movie. Matthew Camp is thoroughly delightful. Definitely, definitely worth seeing. 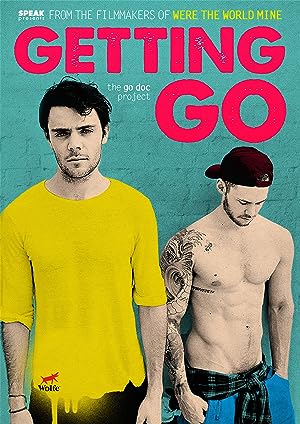 Getting Go, the Go Doc Project (2013)
91 min|Drama, Romance|04 Mar 2013
7.1Rating: 7.1 / 10 from 2,230 users
A shy but smitten college boy pursues a NY go-go boy through the pretext of making a documentary film about him, with the guys knowing each other only as "Doc" and "Go."
Director: Cory Krueckeberg
Creator: Cory Krueckeberg
Actors: Tanner Cohen, Matthew Camp, Ramon O. Torres, Judy McLane

Be the first to review “Getting Go, the Go Doc Project 2013” Cancel reply