A few years from now, something will happen that will change our world. A global event that causes pandemonium, chaos, and death. Life as we know it will never be the same. Left behind are abandoned buildings, empty streets, and other painful reminders of a better yesterday. Not a single adult remains, all victims of this global catastrophe. The only survivors are teenagers and children, living on the streets in the hollowed out shell of a once great city. This is their world now. They make their own rules and enforce their own laws. Some are merely trying to survive, while others rule by force.

Just a few weeks into 2017, many people seem to be overwhelmingly concerned about the potential of societal collapse en route to the full-fledged apocalypse. While these beliefs often appear to have been formed under the influence of fear and emotional uneasiness, there’s always the possibility that tomorrow could bring forth the end of the world as we know it. That potential has been around since the dawn of mankind, and it is precisely what makes stories of life in a post-apocalyptic world so intriguing to those of us that are living relatively comfortable lives. It feels so far away and so close at the same time.

Given the current political climate throughout the United States, there is sure to be a metric shitload of apocalyptic movies with sociopolitical themes on the horizon. Regardless of that inevitable influx, Matthew Ogens’ Go North has the distinct honor of being the first post-apocalyptic thriller to be released on what may be the last year that cinema — and the world, for that matter — exists. Fittingly, it is a not-quite-thriller about the end of the world that is unlike any other movie about the end of days.

Set shortly after a catastrophic event wipes out a significant portion of the population, Go North finds a group of teenagers living inside of a fascistic community where religion is banned and nobody is allowed to return should they decide to walk beyond the gates of the makeshift society. Like Lord of the Flies meets The Breakfast Club, the film analyzes what happens when young people are forced to grow up quickly, under unusual circumstances.

Jacob Lofland (who you might remember for his superb performance in Mud) stars as Josh, an awkward but intuitive teenager whose obsession with the outside world grows stronger with each passing day. Jessie (Sophie Clark Kennedy) feels the same way, and fears that life inside of the community is getting more and more out of control. With tensions rising all around them, the two friends set out in hopes of discovering a better life.

There are a few surprising, but mild, conservative libertarian themes present early on, but the film ditches a majority of its political tone in favor of exploring the characters of Josh and Jessie. While some stones certainly feel unturned in that respect, the film does succeed at doing what it sets out to do. Despite being much more of a coming-of-age drama than a hardnosed thriller, Go North isn’t without its moments of suspense. What is, in a lot of ways, a road movie quickly turns into a chase movie after the two protagonists discover that a number of the community leaders are hunting for them.

Still, the situations in the film never really feel all that frightening, and Jessie and Josh entering into the unknown feels more like two children venturing into a storybook world than into a living nightmare of dread. It does a lot of things correctly in the drama department, but there are definitely times when the universe of Go North almost feels too safe. But maybe that’s exactly what Ogens is trying to point out.

Much like the state of affairs in America, Go North poses the theory that what we are all afraid of is not nearly as devastating as we may believe. Everyone living inside of the bubble is convinced that their immediate death is just beyond the walls, but that may not be true — at least not in Ogens mind. Let us all hope that he is right about that and twenty years from now post-apocalyptic movies resemble the distant future and not the recent past — because Go North is far too interesting a film to be buried underneath a pile of rubble and ash. 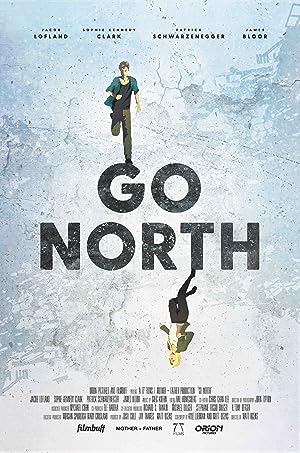