I Want To Be A Soldier” is the story of Alex, an average eight year old kid who seems to grow a morbid fascination for images portraying violence. He begins to develop a communication problem with his parents and other kids at school, and closes in on himself, inventing two imaginary friends..

I wanted to like this movie. The synopsis intrigued me, and the trailer led me to believe that there was some potential. However, what do you get when a Spanish director/writer use British actors to depict a portrayal of violence and the media in the United States? A lot of confusion.

This movie is well shot, conveys a message, and has several actors who, for better or worse, evoke an emotional response from the viewer. Sadly, the message conveyed is largely inaccurate (everything from the impact media has on children, to the notion of the permanence of death – which develops well before the age of 10 mind you, is one sided or flat out wrong), and aside from being a character piece for a few of the actors to showcase their talent, the film provides little novelty to the ‘good child gone bad’ genre as a whole. Although several of the characters come to life, they are poorly written, and at times, flat. As the movie progresses, it is almost as if the writer / director wrap up every stereotype about how the media is a terrible influence on children and serve it to the viewer on an over-sized platter.

Due to the message conveyed (repeatedly) in this film, it comes off as preachy, which makes it hard to enjoy the movie, let alone be surprised by the manner in which the plot unfolds. Had the writer / director approached the issue with more tact, knowledge, and attempted to make the rise of Alex’s behavioral issues more ambiguous, I think they would have had an independent gem. While the film brings up interesting questions about the beliefs parents have about their children, and showcases how many problems children face may be averted if parents would simply pay more attention to their child, the total transparency of the film overshadows these questions, preventing the viewer from making up their own mind let alone think about how these issues arise in society in any meaningful way. Basically, the expectancy mark this film set for itself was not reached.

Overall, this film is likely worth a rent, and may provide an interesting insight into the view foreign countries hold about the violent media in the United States. Although, I am unsure if the director/writers of this film honestly believe the message about the evilness of the media, or if they were just too lazy to accurately highlight a possible social problem. Regardless, just approach this film with an open mind, and do not expect anything new, sharp, or thought provoking. 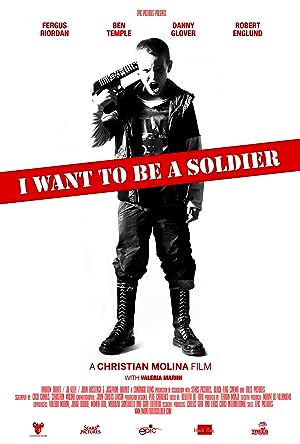 I Want to Be a Soldier (2010)
100 min|Drama|14 Oct 2011
6.0Rating: 6.0 / 10 from 667 users
Alex, an eight-year-old boy, seems to have a macabre fascination for violent images that he sees on television. After his two brothers are born, he feels lonely, and he makes up two …
Director: Christian Molina
Creator: Cuca Canals, Christian Molina, Chesley Heymsfield (adaptation)
Actors: Fergus Riordan, Cameron Antrobus, Andrew Tarbet, Josephine Barnes