Set in 1980s seaside England, this is the story of Edward, an unusual ten year old boy growing up in an old people’s home run by his parents. Whilst his mother struggles to keep the family business afloat, and his father copes with the onset of mid-life crisis, Edward is busy tape-recording the elderly residents to try and discover what happens when they die. Increasingly obsessed with ghosts and the afterlife, Edward’s is a rather lonely existence until he meets Clarence, the latest recruit to the home, a retired magician with a liberating streak of anarchy. Is Anybody There? tells the story of this odd couple – a boy and an old man – facing life together, with Edward learning to live in the moment and Clarence coming to terms with the past.

Small films such as “Is Anybody There?” usually aren’t there, at least as far as box office impact. This one may have a chance at some return because of Sir Michael Caine’s role as a retirement home denizen in 1980’s England. Caine infuses the ex-magician with a bit of movie magic—cynicism baked with pathos and one of the greatest cinema voices ever.

He teaches an equally eccentric 10 year old boy some tricks, and the little one amuses us and Caine with his project to capture the death throes and after activity of dying residents.

That this bleak landscape of death and despair can be lightened by these two interesting characters is a tribute to the magic of a movie actor and movies themselves, small as both may be next to colossal American blockbusters. 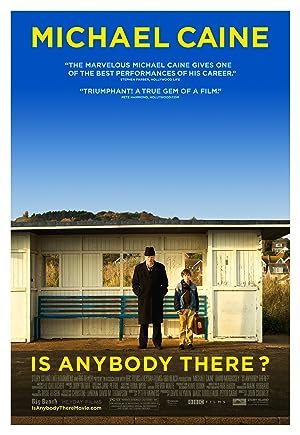 Is Anybody There? (2008)
94 min|Drama|15 May 2009
6.8Rating: 6.8 / 10 from 4,410 users
Set in 1980s seaside England, this is the story of Edward, an unusual ten-year-old boy growing up in an old people's home run by his parents. While his mother struggles to keep the family …
Director: John Crowley
Creator: Peter Harness
Actors: Bill Milner, Anne-Marie Duff, Ralph Riach, Linzey Cocker

Be the first to review “Is Anybody There 2008” Cancel reply