Failed filmmaker Zachary Wells is convinced by his best friend and hotshot director Topher into replacing him as a judge in their film school’s annual festival. Zach’s one-night stand with a student backfires when that student walks into an interview the next morning calling himself Danny Reyes, the name Zach went by when he attended the school. And Danny’s film, “Judas Kiss,” is a finalist in the competition Zach is judging. Zach’s film, also “Judas Kiss,” won the festival years before. As Zach scrambles for answers, a mysterious, chain-smoking campus tour guide, counsels him: “Change the kid’s past, change your future.” But how? Zach comes to believe he can mend his life by disqualifying Danny from competition, putting him on a different path than Zach followed. But will Zach’s plan work?

Judas Kiss is by no means your average story. It has some unexpected twists, dabbling in time travel, love triangles and redemption.

Zach Wells, a failed filmmaker, reluctantly covers for his much more successful friend by taking his place on the judging panel at their Alma Mater’s annual film competition (a competition that Zach won years ago). As soon as he gets on campus… well, it’s not hi-jinks ensue in a kooky way, but Zach starts to notice that things are not what they seem.

The time travel aspect was a cool way to approach the material; certainly a welcome change from the mainstay “let’s do some lame flashbacks to explain how my life got so screwed up.” The film has an interesting cast of characters that all bring something different to the table, too (a little heart and humor).

All of the technical elements (cinematography, lighting, sound, etc) were great, including the subtle effects work. I also thought they did a commendable job making a film with gay lead characters, but not dwelling on their sexual orientation. It was obvious that the focus of the film was on the story and I appreciated that. 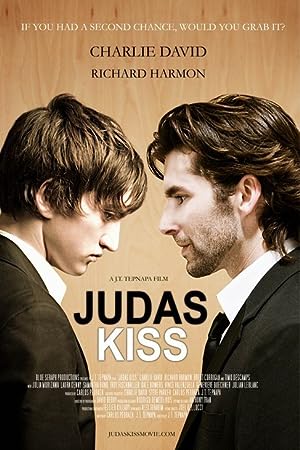 Be the first to review “Judas Kiss 2011” Cancel reply