Fact-based story of a Louisiana priest accused of molesting young parishioners, and of the family of one of his victims, caught between their loyalty to their son and to their Church.

I won’t spoil the show for whoever happens to see this small jewel of a made for TV film! And I will not enter into the theme which the film is about. I suppose it is a bit senseless to air one particular point of view on the Catholic Church, politics, football or women when reviewing a film just for the sake of doing it.

OK… I recommend it because this may be one of the most daring films ever made around the subject of child molestation. The idea has been reviewed a thousand times since the cinema verité started and the New Wave took a place in our world. Maybe Germania Anno Zero is a good example.

In Judgment (sic), we have a splendid cast with a Director that actually dared to do things you seldom even try to do in a film, especially when the subject matter is so explosive. And it explodes in his hands with a blinding, enormous BANG!!

The core of every heart that is rent in this film is portrayed with passion and utmost realism. But when things really explode, the film reaches a climax that is not common at all. And here is where all the actors involved and the Director himself, did something absolutely scary. Obviously, you must watch the whole film to grab its importance and enormous power. Suffice to say Keith Carradine had one of his best and most memorable seconds in front of a camera. I won’t spoil it. You have to see this by yourself to believe it. I don’t know if just the making of that particular take, let a alone the whole scene, ended in special psychological treatment for Keith and Michael Faustino, who plays Robbi, Keith character’s son.

If you have to stop the film because you can’t stand that particular scene, I would understand. It’s happened to a lot of people. If you have children… you’ll know better.

All in all, in 1990, this film was just a small prediction of things to come. 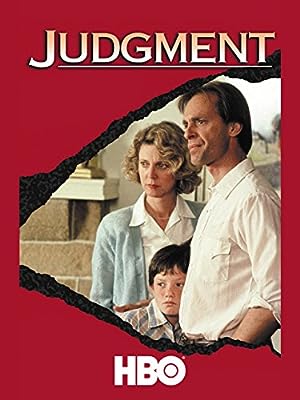 Judgment (1990)
90 min|Drama|13 Oct 1990
6.6Rating: 6.6 / 10 from 195 users
Fact-based story of a Louisiana priest accused of molesting young parishioners, and of the family of one of his victims, caught between their loyalty to their son and to their Church.
Director: Tom Topor
Creator: Tom Topor
Actors: Keith Carradine, Blythe Danner, Jack Warden, David Strathairn