In the 20’s, in Netherlands, Jacob Willem Katadreuffe has just concluded the law school and has an argument with the High Court Enforcement Officer Dreverhaven at his office. Katadreuffe leaves the place covered in blood. On the next morning, he is arrested by the police for the murder of Dreverhaven. He claims that he is innocent and discloses the story of his life to the Chief of Police. His mother Joba was the maid at Dreverhaven. One night, she is raped by him and a couple of weeks later she learns that she is pregnant. Dreverhaven proposes to marry her but Joba quits her job and leaves his house. Along the years, Katadreuffe is bullied at school and called bastard by his mates and his mother never talks to him. One day, he is involved by other kids in a theft of bread and arrested by the police. When he calls his biological father to help him, Dreverhaven tells the police that he does not know who Katadreuffe is. The boy is intelligent and learns English reading a superseded and incomplete edition of encyclopedia that was left behind by the previous tenants of his apartment. Katadreuffe is also ambitious and asks for a job in a law office, where he becomes the protégé of his mentor De Gankelaar. Soon he falls in unrequited love with the secretary Lorna Te George Victor. Along the years, Dreverhaven uses his power to harm him. When he concluded his course, he decides to pay a visit to Dreverhaven to tell him that he has wined their dispute. May Katadreuffe have killed Dreverhaven?

It is not too frequent that we get Dutch programmes of films or TV-minis in this corner of Europe, and when they do appear it is thanks to the regional Basque TV Station `EITB’. Indeed over two years has passed since seeing the excellent mini `Charlotte Sophie Bentinck’ (1996) (qv) and seeing the very interesting `Karakter’ recently.

Set in the 1920’s this film has excellent mise-en-scéne wonderfully photographed, mostly in Holland and Belgium, but with some scenes shot in Wroclaw, Poland, with street-cars of the times, in which the darkened almost greyish brickwork of the tenement buildings and the industrial port areas takes on an intense protagonism in the film’s development. Palais van Boem’s musical contribution is mostly just right, though at times seemed to be a little boorish.

A young, illegitimate boy grows up with his unmarried mother, whilst the father, Dreverhaven, continuously appeals to her to marry him, but always rejected. However, the father seems to do everything possible to disrupt the young man’s life, as his mother becomes more and more detached and uncaring. It would seem that Dreverhaven is playing out a real-life game of chess around his son Jacob, as if trying to corner him into submission and apathy, but which the young man manages to survive. The psychological impression is that one or the other would undo his `bitter foe’, but that despite the father’s vast fortune and power the struggle of will would rebound against him.But as the Dutch saying goes: De één zijn dood, is de ander zijn brood’

This is no `thriller’ in the ordinary sense, more a psychological suspense which requires attention throughout. The acting is magnificent: both Fedja van Huêt and Jan Decleir play out their parts with just the right touch, especially Decleir, and Lou Landré as Rentenstein is almost spellbinding, not to be missed.

Here is another example of the unarguable fact: here in Europe we make cinema, not blockbuster box-office hits. 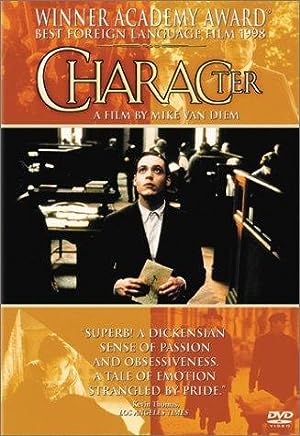 Be the first to review “Karakter 1997” Cancel reply