Fifteen-year-old Brandon longs for a pair of the freshest sneakers that money can buy, assuming that merely having them on his feet will help him escape the reality of being poor, neglected by the opposite sex and picked on by everyone – even his best friends. Working hard to get them, he soon finds that the titular shoes have instead made him a target after they are promptly snatched by Flaco, a local hood. Brandon goes on a mission to retrieve his stolen sneakers.

Kicks allowed me to gain some very valuable insights into the mind of a kid growing up in Ridgemont, Oakland. When you hear of all the blood being spilled in those most violent and godforsaken places of the US you begin to wonder where it’s all coming from.

The movie is about a kid who longs for peace of mind and a firm social standing. Alas where our protagonist lives such a firm social standing is mostly determined by status symbols and more importantly by proving one has the power to acquire what others desire in order to show that eventually they will belong to the select few who find a way out of the hell they were born into.

But those left behind have no role models left but those who left it all behind, those long gone from the moral vacuum that keeps holding younger generations captive. A vacuum that not only makes sure these young people remain right where they are, but further fuels their despair by sucking in drugs, guns and unprotected sex.

The film tackles many subjects – lack of family identity, lack of moral guidelines, drug and gun availability, the media infusing our minds with questionable role models and the products that define them are only a few of them.

At the same time it’s a coming of age film about a boy who reaches a point where he has to learn what it means to stand up for himself as well as ask himself what is worth to be stood up for and how much it is worth.

The kid’s voice-over narrative reminded me of the pieces of prison wisdom presented by the guy in a wheelchair from Oz. These poetic moments bring some peace into the relatively loud, violent and fast-paced story.

Aesthetically the movie was absolutely flawless, the trailer gives you a good idea what to expect in this department. The story is split into chapters and each chapter is introduced by a song that is descriptive of the content that is about to unfold.

There’s nothing bad to be said about the acting either. These kids do their job better than most adults can.

The sexist elements and overstylization of the subculture presented might put some viewers off. I for my part felt they were essential tools that allowed us to peek into the minds of teenagers in poor urban American neighborhoods and that thereby allowed us to see what it is these kids desire – The simplicity of leading a life that has been promised to them. 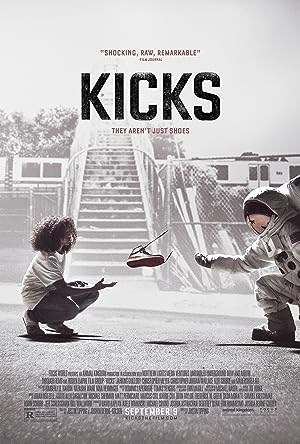 Kicks (2016)
80 min|Adventure, Drama|09 Sep 2016
6.3Rating: 6.3 / 10 from 3,775 users
Brandon is a 15 year old whose dream is a pair of fresh Air Jordans. Soon after he gets his hands on them, they're stolen by a local hood, causing Brandon and his two friends to go on a dangerous mission through Oakland to retrieve them.
Director: Justin Tipping
Creator: Joshua Beirne-Golden, Justin Tipping
Actors: Jahking Guillory, Christopher Jordan Wallace, Christopher Meyer, Kofi Siriboe

Be the first to review “Kicks 2016” Cancel reply