A young coming-of-age tale about a teenage boy, Simon Spier, goes through a different kind of Romeo and Juliet story. Simon has a love connection with a boy, Blue, by email, but the only problem is that Simon has no idea who he’s talking to. Simon must discover who that boy is–who Blue is. Along the way, he tries to find himself as well.

Here are my thoughts about Love, Simon:

First, it was definitely the best movie adaptation of a book I’ve ever seen. Hands down. It was also an extremely authentic story to begin with, and it translated so well as a movie.

Second, I wish this movie had been around when I was younger. The message of love and acceptance was so powerful, and the way Simon and his friends were portrayed was amazing. Kudos to the actors. The whole theater was cheering, laughing, and crying with them.

Representation matters. Our kids need to see themselves on screen in movies like this. 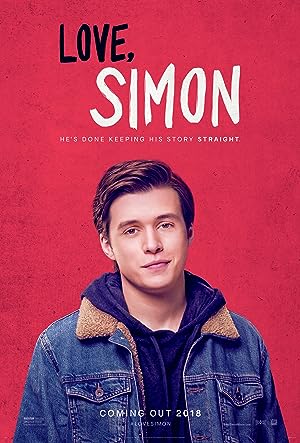 Love, Simon (2018)
110 min|Comedy, Drama, Romance|16 Mar 2018
7.6Rating: 7.6 / 10 from 78,688 users
Simon Spier keeps a huge secret from his family, his friends and all of his classmates: he's gay. When that secret is threatened, Simon must face everyone and come to terms with his identity.
Director: Greg Berlanti
Creator: Elizabeth Berger (screenplay by), Isaac Aptaker (screenplay by), Becky Albertalli (based on the novel "Simon vs. the Homo Sapiens Agenda" by)
Actors: Nick Robinson, Jennifer Garner, Josh Duhamel, Katherine Langford

Be the first to review “Love, Simon 2018” Cancel reply