Max Doyle takes some objects from a haunted house to help his ghost friends Nicky and Tara, upsetting a whole bunch of spirits in the process.

Mostly Ghostly 3: One Night in Doom House(2016) Starring: Corey Fogelmanis, Sophie Reynolds, Blake Michael, Olivia Ryan Stern, Vivian Full, Andrew Herr, Jedidiah Goodacre, Jamie Kennedy, Peter DeLuise, Anne Marie DeLuise, Karen Holness, Zak Santiago, Ali Eagle, Alexa Barajas, Juliette Cohen, Adam Tsekhman, Darryl Van Dyke, Nelson Wong, and Danny Trejo Directed By: Ron Olivier Review Hello Kiddies your pal the Crypt-Critic is back with another children’s horror film from R.L Stine.The third chapter in the mostly Ghostly series which apparently is not a trilogy but a series. Okay. Looks like Crypty got some information wrong with his last review. No worries. Anyway. The third film in this series which oddly enough was released this year on DVD go figure, brings back Max with his two ghost friends who are still on a search for there parents. They feel like they are more ghost pets to Max than actual friends as they do all his magic stunts with ghost stunts as he calls upon spirits. During one show to raise money for his girlfriend Tammy’s dance, he calls upon a spirit who tells Nicky and Tara the whereabouts of there parents, The Elsewhere. Fearce has returned to put an end to Nicky and Tara and unleash his undead army with a crystal from Max. This chapter isn’t as impressive as the last one I saw, I had a lot more fun with the last for I mean I thought the actors were great but the change of actors where terrible. I was not fond of the acting at all except for maybe I think the same guy who played Fearce or at least I think it was the same actor. The story did seem a little fun but fell flat for me, and the effects of course are never good so this was a very disappointing chapter. I’m giving Mostly Ghostly 3 a one and a half out of five. 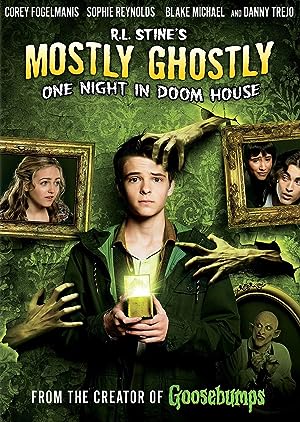 Be the first to review “Mostly Ghostly 3: One Night in Doom House 2016” Cancel reply