A night in the woods, and its aftermath, helps Otter with a major life decision. He’s a high school senior, hanging out with Darby – the local alpha male – and Darby’s girlfriend Amber. Their public displays of affection irritate Otter. One afternoon, Darby gives Otter a ride, and while taking a short cut on a country road through the woods, Darby’s car breaks down. They spend the night there. They swim in a stream and sleep side by side. Something happens between them. Will it change anything in Otter’s life?

Otter, played by Bobby Steggert is a talented artist, having applied to go to an art college after high school. The college are willing to accept him and Otter should be thrilled, but he isn’t. Why? Mainly because he’ll get to spend less time with his friend Darcy, played by Damon Cardasis. When Darcy is trying to dunk Otter underwater, Otter thinks that’s the only time Darby’s going to go near him willingly. With Darcy’s girlfriend Amber always in the shadows as permanent competition, Otter finally gets alone time with Darcy when they arrange to go to a concert featuring a band called the Lunachicks. One of their songs are played in the film, it fits the story. Darcy tries to take a short-cut, and they end up running out of gas in the woods.

Drinking and wondering around, they go back to the car when they hear a gunshot, only going back out later to swim in the dark. The conversation which happens after that changes their friendship. It leaves Otter with the only choice to make up his own mind and do what’s best for him. Created by Daniel Falcone, this plot has been done a million times before, but the acting is good and Otter and Darcy’s friendship is believable throughout it’s ups and downs. I doubt viewers will be disappointed by this film. 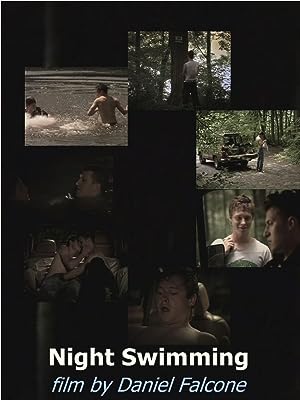 Be the first to review “Night Swimming 2005” Cancel reply