No Way Out 2008 with English Subtitles

Joaquin (Polo Ravales), an unassuming fisherman, is forced to confront his homosexuality when his sex-starved wife Cynthia (Althea Vega) returns from her overseas job eager to get pregnant. His young and impulsive lover, Waldo (Joseph Bitangcol), flees to Manila in disgust. After a month of hesitation, Joaquin leaves his wife to follow Waldo. His search takes him on a seamy yet colorful trip through Manila’s gay underbelly. He discovers Waldo’s dangerous flirtation with Rufo (Emilio Garcia), a bisexual rogue cop who holds the clue to Waldo’s disappearance. Rufo lures Joaquin into his home and introduces him to his submissive wife, Beng (Jean Garcia). A sadist who beats up Beng regularly, Rufo turns Joaquin into a prisoner and sex slave – like he did to Waldo. When Joaquin is finally reunited with Waldo, he discovers that Rufo is about to sell them like fish to an international sex trafficking ring, along with his personal harem of male and female captives. With Beng’s help, the two lovers plot their escape.

Sometimes we think that we can do anything for love, but when it is not given back in the same way we are able to take desperate measures. That’s the case of Waldo, who thought that Joaquin was going to stay with him, even after Joaquin’s wife came back. In desperation Waldo disappeared from the village full of pain and angry He thought he was doing right, but he didn’t knew. After Waldo’s disappearance Joaquin decided to follow his track. Soon he discover with horror what the destiny had for both of them. Polo Ravales as Joaquin, delivers a solid and believable performance. His Joaquin goes for the streets, looking for his lost love. Joseph Bitangcol gave us an annoying demanding teen who push Joaquin to the limits to have him back. Emilio Garcia close the triangle representing the use and abuse as a manipulator cop. Love and desperation were well represented in the whole movie and were palpable. It is a good movie to see if you can handle it 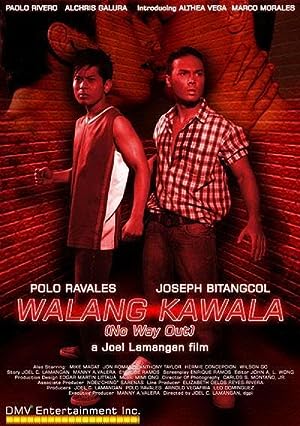 1 review for No Way Out 2008 with English Subtitles