A girl is mysteriously killed after recording herself playing with an ancient Ouija Board, which leads to a close group of friends to investigate this board. They later find out that some things aren’t meant to be played with, especially the ‘other side’.

I usually don’t introduce posts in that manner but on this special occasion, it really has to be. And, what really made the deception bigger was the fact that I remember that I paid $10 to watch this movie in a cinema in Puerto Rico (I can’t remember if it was Halloween or not, but anyways) when I could have saved myself from such a struggle. Ouija is the pinnacle of the type of movie one would watch while doing something on a side and certainly not pay 100% of his attention towards it — something well, which is not easy to do in a cinema. Then, you can always leave […]

What bothers me primarily is the extreme simplicity that resides into the movie. Secondly, the fact that I was able to anticipate 80 to 90% of the times when the scare was going to fall. At last, the fact that when the scary part DID fall, they were not as scary as I would have expected them to be.

All I learned after Ouija was that it is the perfect movie to introduce somebody who hates horror movies to the genre but certainly not for intermediate/advanced spectators who love it.

I remember my reaction at the end of the session and I was like ‘what did I just watch’ and it seemed like my friends had the same reactions. Unfortunately, I really do not know what to say and don’t have much to say from a pure technical standpoint because it’s just too simple minded and too predictable to really have anything of note and my post would be filled with unnecessary negatives. I’ll just let the my note speak for itself then. 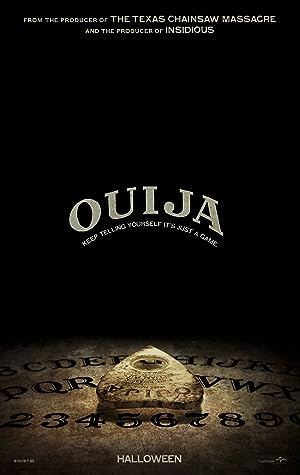 Be the first to review “Ouija 2014” Cancel reply