Shy, sensitive April is the class virgin, torn between an illicit flirtation with her soccer coach Mr. B and an unrequited crush on sweet stoner Teddy. Emily, meanwhile, offers sexual favors to every boy to cross her path – including both Teddy and his best friend Fred, a life wire without filters or boundaries. As one high school party bleeds into the next – and April and Teddy struggle to admit their mutual affection – Fred’s escalating recklessness starts to spiral into chaos.

Palo Alto is one of my all-time favorite movies. It touches my heart unlike most dramas, and is more realistic than any other high school movie. It touches on important subject, and brings to life an atmosphere of what real high school is. It is powerful, and incredibly emotional at times. It doesn’t try to be something it’s not, doesn’t try to make high school look better than it is. It’s the most honest movie I have truly ever watched, and I go back to it again and again. Gia Coppola did an excellent job telling the original story of what James Franco had written. I thought I would go ahead and list some criteria (from least important, to most important: Filmography, and setting: The setting takes place exactly where the title says it does, Palo Alto, California. Most of the time the lighting in the film is somewhat dreary and gloomy. I would definitely categorize this as an “art film” because it’s the actiong that brings this to life, the setting is merely a backdrop. Much of the filming has wide shots, and shots from down below, showing lots of shadows and emotion on the characters faces. Acting: I would give the acting an A, Emma Roberts being the one who did the best job portraying her character, although Jack Kilmer comes a close second. He really makes us believe he’s s teenage guy in a small town, messing around to have some fun. Everybody in the film is extremely believable, they reminded me of people I know. Even myself– I can relate to all of it. The small town boredom, and partying every weekend to try to bring some life back into our eyes. Theme: This is my most important criteria. We all know that the main plot of the story is what ties it all together. But with Palo Alto, the only major plot is teenagers dealing with everyday struggles, and how to maneuver around new relationships. Dealing with things like hook-ups, drinking, community service, friendship, and sports.It is so incredibly well done and believable. I have gone through high school myself, and first watched this back when I was actually in high school. It was a breath of fresh air from all of the other high school dramas portraying high school to be something it’s not. I would highly recommend any high school-er watching this, or anyone really. We sympathize with the characters, and cry and laugh at the same time. It’s a great film. 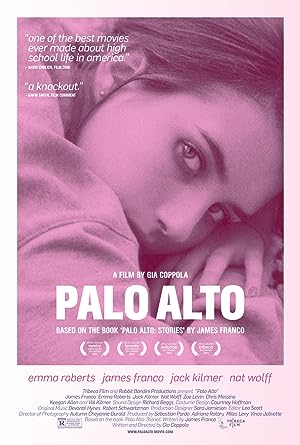 Be the first to review “Palo Alto 2013” Cancel reply