Thirteen-year-old Jesse is a typical teenager who hates his teacher, Mrs. Fink. While visiting a vintage clothing shop, Jesse sees a doll that looks exactly like his dreaded teacher, and he convinces the shopkeeper to sell it to him. When Jesse accidentally pierces the doll’s arm with a sewing needle, he is shocked to find Mrs. Fink with her arm in a sling the next day and gets spooked when a spot on the doll’s face appears, exactly where Mrs. Fink has a mole. Jesse’s worst fears are confirmed when the doll crawls out of his backpack and speaks to him. He throws the doll away, but it turns up in his room again. Jesse is desperate for help. Geneva’s friend Sol who is knowledgeable about voodoo, determines that the doll is using Mrs. Fink’s vitality to keep itself alive. Geneva and the boys plan to cast a spell to send the doll back to where it came from. Geneva warns Jesse that he must have pure intent for the spell to work, since the doll is nourished by negative energy. As a result, Jesse becomes more organized, more focused in school and more responsible around the house. As the full moon rises, Jesse performs the ceremony to restore Mrs. Fink to her rightful place and banish the doll to Shadow Zone.

Haha I first rented this at Blockbuster when I was very young, and it scared the crap out of me. There is just something about the Grim Reaper at the start, and what the voodoo doll does that creeped me out. However, I for some reason rented it several times. It has both comedy and horror(tame of course, but still pretty dark for a kids movie). I recently rented it on Netflix (for a stroll down memory lane) and watched it for the first time in about, 7-10 years? Still pretty good, a few cheesy parts of course, but decent at that. Has an interesting enough plot to keep you going, and the doll is just creepy as hel*! Ha. It centers around a middle school kid and his friend that hates his teacher(who didn’t at that age?) The kid and his friend go to an old artifact shop and find a doll that the kid thinks resembles his teacher. He buys it, and slowly through the movie it looks more and more like his teacher, and whatever happens to it happens to the teacher. What starts off as playful and interesting turns into a horrific experience for the kid, so he seeks out the help of his friend and the friend’s older sister to help destroy the doll. A good movie to watch when you’ve got nothing else to do. 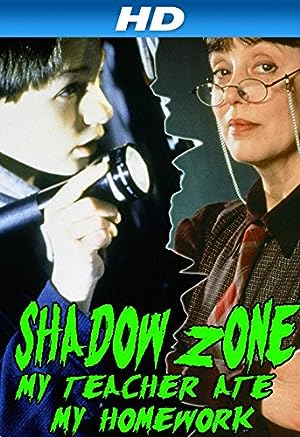 1 review for Shadow Zone: My Teacher Ate My Homework 1997