A heart-pounding thriller about a widowed child psychologist who lives in an isolated existence in rural New England. Caught in a deadly winter storm, she must find a way to rescue a young boy before he disappears forever.

I hadn’t heard of this film until yesterday, and all I saw was the poster. It looked fantastic and film noir’esque with the blinds and shadows, I was sold on that alone. I didn’t want to watch a trailer and go in blindly cause the poster is supposed to represent what the movie is also. I do have the Movie Pass, so though I pay the monthly subscription fee for the service, I didn’t actually have to pay to go in the door to see the movie which has led me to seeing some great films on a whim that I otherwise wouldn’t have seen that I loved, I sometimes go twenty times a month to the movies, so going to this on a whim was not a rare occurrence. Plus I love Naomi Watts, ever since Mulholland Drive I’ve been a fan of hers.

Within the first ten minutes I realized that the film was going to be vastly different than the poster, which is fine, calling an audible on the line of scrimmage isn’t going to make me hate the film, sometimes those turn out to be the best movies, but within twenty minutes I sat there and I knew exactly what was going to happen, and it only got worse from there. They really could have taken what they had and made something incredible, it was there, but instead they decided to go and make a paint-by-the numbers “thriller” that didn’t even allow them to color outside the lines at all.

At on point in the film I looked at Naomi Watts and knew she must have needed a new car or something as this was a phoned in performance, everyone else in the movie did great and really tried, but I feel like they knew they were in a dud and were trying to pump themselves up and give the best damned performance of their careers to make the movie better than it was turning out to be.

Yes, there was some great cinematography, some that even followed suit with the noir style poster that drew me in, so that I enjoyed. They really did try to make it look great, so I applaud them on that.

But all in all, this film is what I tend to think of as a disposable cup movie. You’re thirsty, so you grab that small plastic cup next to the water cooler, take your drink and toss the cup in the garbage and forget you even had a drink. 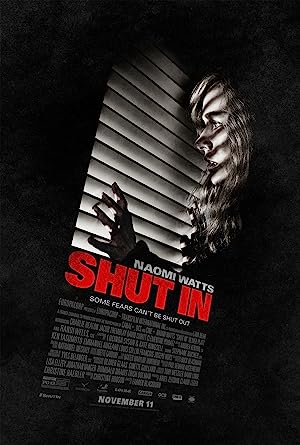 Be the first to review “Shut In 2016” Cancel reply