American kids go to a space camp during the summer holidays. They learn how to operate the Space Shuttle. A team consisting of a guy who just entered to meet girls, a wanna be astronaut and an instructor who wanted to go on a mission instead of teaching can sit in the Shuttle while testing the engines. Then they’re launched by mistake …

“This one time at space camp….” Ahahaha…ahem…oh well. Down to business. Participants in NASA’s real life Space Camp can undergo a limited version of real astronaut training. Well for a few of them the training gets a little too real. Lea Thompson, Kelly Preston, and some teen age punks are accidentally blasted into space, along with astronaut Kate Capshaw. You’d think being stuck in space with those three ladies would be a fantastic weekend, even with Joaquin Phoenix along as a whiny brat. Well it is, until the oxygen starts to run out. Whu-Oh! Luckily Tom Skerrit is on the ground to help out.

This is a fun little movie meant simply as family entertainment. Of course it has technical inaccuracies, it’s a movie about kids being launched into space. I just don’t understand people who rag on it because some aspects aren’t technically correct. This isn’t a NASA training film, it’s just an exciting little film that a family can watch together. It also stars Larry B. Scott, who also played Lamar in Revenge of the Nerds, and Terry O’Quinn, who played Locke in Lost. 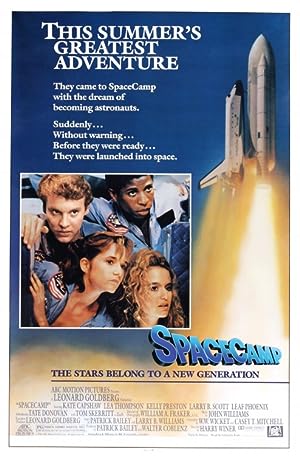