As Spud Milton continues his awkward stagger through adolescence, he learns one of life’s most important lessons: When dealing with women and cretins, nothing is ever quite as it seems. “I’m practically a man in most areas,” writes Spud confidently on his sixteenth birthday. The year is 1992 and, in South Africa, radical change is in the air. The country may be on the bumpy road to an uncertain future, but Spud Milton is hoping for a smooth ride as he returns to boarding school as a senior. Instead, he discovers that his vindictive arch enemy is back to taunt him and that a garrulous Malawian has taken residence in his dormitory, along with the regular inmates and misfits he calls friends. Spud’s world has never seemed less certain; he attempts to master Shakespeare, wrestles constantly with his God, and the power of negative thinking, and develops an aversion to fried fish after a shocking discovery about his grandmother, Wombat.

I’m not quite sure why the other two reviews hate the film so much. True, it doesn’t have quite the sense of fun of the previous two movies, with the Crazy 8s up to far fewer antics, and there is indeed too much of the running time dealing with Spud’s family, but for a third outing in a film series, this isn’t really letting the side down. The script – by the author of the books, it should be noted – is less focused than previous and jumps around all over the place, but still has its moments – and there is a rather nice poignant scene between Spud and The Gov (played by John Cleese) towards the end of the film which is surprisingly touching. Elsewhere, things are a little repetitive if you’ve seen the other movies in quick succession, with the usual romantic liaisons, spliffs, alcohol, and school plays – not in that order necessarily.

It seems likely this will be the last film in the series, which is a bit of a shame, as I’m guessing most audiences would want to see the final book made into a film too. That said, these movies have been something of an easy-going, unexpected treat, with a decent mix of comedy and poignancy and, perhaps best of all, John Cleese doing his best Robin Williams/Dead Poets Society impression and pulling it off. He even gets a bit of love interest in the final film, which is a nice touch.

So yes, it’s not quite up to the standards of the others, but it’s certainly not the mess that some would have us believe. 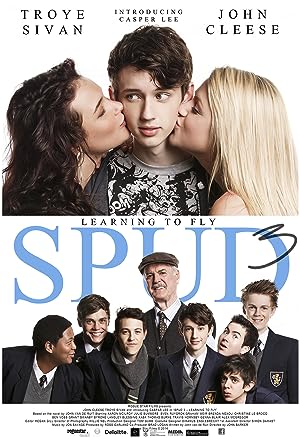 Spud 3: Learning to Fly (2014)
89 min|Comedy|15 Nov 2014
6.0Rating: 6.0 / 10 from 792 users
As Spud Milton continues his awkward stagger through adolescence, he learns one of life's most important lessons: When dealing with women and cretins, nothing is ever quite as it seems. "…
Director: John Barker
Creator: John Van De Ruit
Actors: Troye Sivan, Sven Ruygrok, Blessing Xaba, Genna Blair