Half a dozen lower-class Welsh kids in their mid- to late-teens ditch school to go joyriding in the woods. There, they befriend a lone enigmatic man who while at first, seems friendly, starts showing signs of hostility. Manipulating and bullying the children.

This new feature from Julian Richards the director of THE LAST HORROR MOVIE boasts another ‘volcanic’ performance by Kevin Howarth. It would spoil the fun of SUMMER SCARS to reveal what exactly happens, but this morality tale, which takes place entirely in a forest, is an unsettling film about abuse, mental, emotional and physical.

This is a film that has resonance with a youth crime phenomenon in Britain. As knife crime dominates London and teen suicide dominates Wales, the best screen villains are now not serial killers or zombies but contemporary British youth (although In SUMMER SCARS the teens are more anti-hero than villain).

The irony, of course, is that SUMMER SCARS works precisely because of this social context, and not despite it. It is beautifully shot and intensely acted, and it’s queasy approach to youth culture gives it a fascinating attraction.

We’ve had troubled youth movies in the past, everything from BULLY to MEAN CREEK, but this bold marriage of topicality and slick genre formatting is startling and defiantly un-Hollywood. 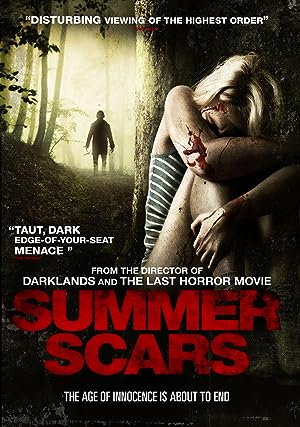 Be the first to review “Summer Scars 2007” Cancel reply