A teenage boy lives with his single mum in a flat in South London. Into the flat below moves an anti-social, former Rock God who faked his death 8 years ago. The teenage boy works out who the mysterious neighbour is and blackmails him into teaching him the dark arts of Rock Guitar.

If you have ever gone into a movie with low expectations and later left feeling surprised that it actually blew you away, that kind of movie for me was Beat Beneath my Feet. For the most part, I was incredibly impressed by the depth of the narrative and progression of the characters. Starring Nicholas Galitzine as Tom, the central character who is so socially inept that his only friend in his world is rock music. Unfortunately for Tom, his mother (who is played by Lisa Dillon) rejects this music because his estranged father was a former rock star who spent more time on tour than with their family. Another former rock star, Steve (played by Luke Perry) enters their lives and things start to change for both Tom and his Mother. Though the characters are broken and feel out casted in some way, they strike a bond that helps them escape their shells. When the story felt like it could lose my attention, it managed to pull me back in by adding short music videos, which served to express what Tom was feeling while simultaneously providing you with enjoyable music. For a movie revolving around music, this is an important quality to possess and Beat Beneath my Feet certainly delivered on this level as well as many other levels. 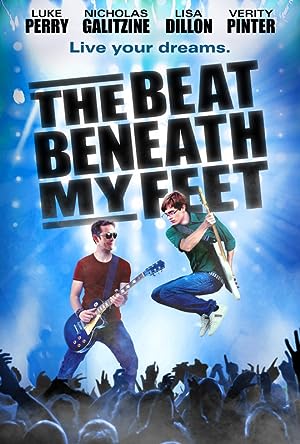 The Beat Beneath My Feet (2014)
91 min|Comedy, Drama, Family, Music|21 Oct 2016
6.5Rating: 6.5 / 10 from 997 users
A teenage boy discovers his unruly neighbour is really a disgraced Rock God who "died" 8 years ago owing a fortune in unpaid tax. The boy agrees not to reveal his secret on condition that he teaches him the dark arts of Rock Guitar.
Director: John Williams
Creator: Michael Müller
Actors: Luke Perry, Nicholas Galitzine, Lisa Dillon, Verity Pinter