Mark Sway is an 11 year old boy who lives with his mother and brother in a trailer. One day he and his brother are hanging out when a car pulls over beside them. The driver then sticks a hose in his exhaust and puts the other end into the car. Mark pulls it out. But the man sees him and grabs him and takes inside the car. The man talks to Mark then later shoots himself. The shock sends Mark’s brother into a catatonic state. The police question him and slips out some stuff that makes them think he’s saying more than he knows. Roy Foltrigg, a prosecutor with political ambitions tells Mark he wants to talk to him tomorrow. Mark feeling that he needs a lawyer, sees Reggie Love. Mark tells her about the man who killed himself. Reggie tells him he’s a mob lawyer. And one of his clients is a member of a mob family who is suspected of killing a Senator who was trying to take down his family. But because the Senator’s body is missing, they can’t prosecute him. Reggie thinks Foltrigg thinks the lawyer told Mark where the body is which is why he wants to speak to him. Mark goes to meet Roy and when he threatens him, Mark steps out then Reggie comes in with a recording of his conversation with Mark telling him that made several violations. In the meantime, the mobster is told by the head of the family to take care of Mark. So he threatens Mark. Mark doesn’t know what to do and learns that Reggie has some secrets of her own and is uncertain if he can trust her.

“The Client” is an enjoyable and well executed thriller overall. While the directing, script and overall product are far from amazing and sometimes quite bland, the Oscar level performances compensate for the easily over-seeable flaws.

Perhaps the child of the title, Brad Renfro, can be annoying in parts he gives a decent enough performance nonetheless. Too bad about the drinks and drugs problem he has today. Susan Sarandon gives another terrific performance, this time as an alcoholic lawyer. Tommy Lee Jones’ character doesn’t have much to do with the plot but he’s a welcome addition to the film, even though.

While it is easy to find fault with the film it’s easier to just sit back and enjoy it. I chose the latter so I thought it was a good, if not spectacular movie overall. 6.8/10. 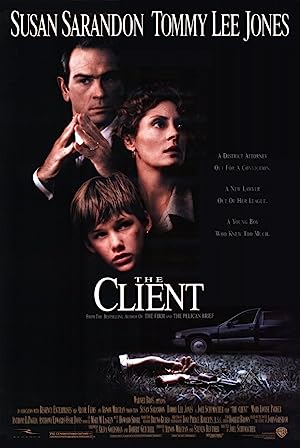 Be the first to review “The Client 1994” Cancel reply