Home » Foreign Movies without Subtitles » The Cormorants 2016 with English Subtitles

The Cormorants 2016 with English Subtitles

In the summer of their twelfth year Matteo and Samuele spend their days between the river, the forest and the shopping center, but compared to previous years, something is changing. The game becomes boring, imagination gives way to discovery, adventure turns into life experience. A summer without beginning and without end, the story about a friendship, an age and a land which are obliged to change with the inexorable passage of time.

I cormorani is a diving film. Immersion in the summer of the Italian province, in the summer of the school holidays of Sam and Matte, two friends straddling puberty and adolescence. Fabio Bobbio bravely faces the theme of this strange age, because he decides to restore all the uncertainty, indolence, laziness and curiosity together. And the whole film is crossed by that nervous boredom that characterizes this moment of growth, in which the residual childhood reflexes are surpassed by new needs, new perspectives. A moment of disorientation, well represented by the summer limbo of the very long school holidays all Italian, well represented by a geography of the margins, the margins of a Po valley returned in its wild, unripe nature. Between the house, place of childhood, and society, place of adulthood, Fabio Bobbio portrays a middle world, that of the discoveries of early adolescence, made up of groves, viaducts, disused amusement park and abandoned garages: a geography of the margins that materializes the end psychological analysis of the two boys. It could bore this film, but if so it would also be for this successful: the impressive sincerity of Fabio Bobbio willingly matches the willingness of the viewer to let himself immerse in the real emptiness of the world of Sam and Matte. However, these are empty spaces constantly filled with a close, fraternal friendship, also portrayed in its evolution. Over time, playmates let individual characters emerge, even accepting the possibility of separation.
I cormorani has a documentary soul, also dictated by the choice to involve non-professional actors, but it is fortunately a film built, researched, elaborated around its core documentary. It is only a question of reality, of fidelity to a real conveyed in its naked truth, with its emptiness and its fullness. The cormorants teach us a rhythm perhaps not very cinematographic but certainly adherent to the real, guaranteeing us an experience that remains indelibly imprinted a long time after watching the film. In fact, the film works a bit like a Proustian madeleine: I believe that anyone, especially if Italian, will find the precise sensations of that uncertain age, characterized by many possibilities and few facts. An age in which the first profound experience of boredom combines an intact capacity for amazement, and in the anonymous void of everyday life, small events appear as events, events that present themselves with the force of explosions. 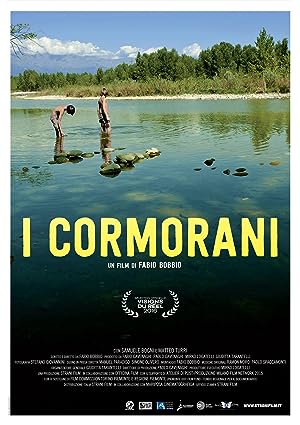 The Cormorants (2016)
89 min|Adventure|01 Dec 2016
6.1Rating: 6.1 / 10 from 47 users
In the summer of their twelfth year Matteo and Samuele spend their days between the river, the forest and the shopping center, but compared to previous years, something is changing. The …
Director: Fabio Bobbio
Creator: Fabio Bobbio
Actors: Samuele Bogni, Valentina Padovan, Matteo Turri

1 review for The Cormorants 2016 with English Subtitles