Troubled TV personality Steven Evans struggles to find meaning in his life in the face of the superficial world he has created. Smothered by celebrity and materialism, Steven’s only respite is through solitary visits to the ocean and shallow sexual encounters with the acquaintances that orbit his life. When his long-term partner hurls him headfirst into fatherhood, Steven’s initial reluctance is gradually replaced with love, as he discovers, in his new family, a bond stronger than any he has experienced before. But the return of an unexpected visitor triggers off a series of events that thrusts Steven and his family into a cycle of loneliness, self-destruction and grief.

Gloriously gay from its sensual start, this emotional rollercoaster ride of a film, as based on the stage play Internet Baby by Julia Britton and adapted for the screen by noted Melbourne playwright and actor Angus Brown, is but a tour de force from leads Graeme Squires and Nicholas Gunn; faces that will be familiar to fans of global Aussie soaps Home and Away and Neighbours. Yet what the pair get up to here is certainly past the watershed, having thrown themselves with wild gay abandon into their roles, letting their mouths pay tender lip-service, that is when not getting down to some seriously naked man-sex that is sure to become a topic of conversation.

Yet at the core of this film is the issue of child adoption, a situation that no doubt many gay couples will find themselves in, yearning to adopt a child, yet faced with the reality that at the period in which the film is set (early 2000’s) and even to this day in certain Australian States, male same-sex couples have virtually no opportunities to become legally recognized parents and adopt a child. It’s a situation that finds Steve and Alex enlist the services of Nerine; a newly pregnant loose cannon of a girl who has no desire to raise a child, being all too keen to take the money and run. Only run she does not, returning later to remind the gay dads of the bitter home truth that they have no legal rights to adopt, or even rear – their son.

Shot with an eye for the stunningly beautiful coastal views of the area by cinematographer Michael Schoell and complete with solid support from one and all, and in particular from Jessikah Brown as lovable / loathsome split personality styled Nerine, frankly there’s a lot to like here, most notably the wonderfully realistic interplay between Squires and Gunn, with Squires’ portrait of a closeted TV host all too eager to cheat on his partner with anyone happy to get friendly with his manhood, all but destined to blow up in his character’s face, having lived his life far too long in a superficial world where one meaningless sexual encounter merges into another. Then again, this is a film not afraid to show the ugly side of life; from bad parenting, to the raw reality of drug addiction.

Yet it is the actors willingness to be so physically intimate with each other that takes this production to another level, making their on-screen relationship so real that you feel you’re almost eavesdropping on their emotional ups and downs. For it is the joy that Steve and Alex find in their son that shines through the celluloid frames of this work, as the couple not only embrace parenthood, but their love and commitment for each other, a sugar-coated ending that director Robert Chuter opts to paint with a touch of sadness, leaving you to question if all good things do indeed come to an end, in this captivating cinematic dissertation on the true meaning of happiness. All of which makes for a superlative debut feature from Fat Kid Films, with Chuter proudly saying it – like it is. Good on ya mate. 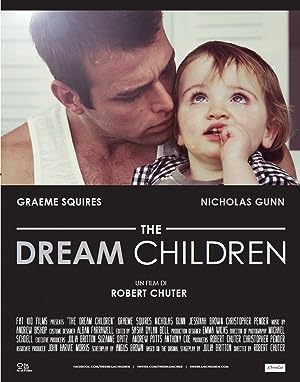 The Dream Children (2015)
98 min|Drama|30 Apr 2015
5.3Rating: 5.3 / 10 from 274 users
Troubled TV personality Steven Evans struggles to find meaning in his life in the face of the superficial world he has created. Smothered by celebrity and materialism, Steven's only respite…
Director: Robert Chuter
Creator: Julia Britton (based on a play by), Angus Brown
Actors: Graeme Squires, Nicholas Gunn, Jessikah Brown, Chris Pender

Be the first to review “The Dream Children 2015” Cancel reply