One night at a friend’s house party, a somewhat confident Dave meets a cool and artistic girl named Aubrey. She helps him with his romantic feelings for Jane. They talk about Dave’s feelings, and he believes he should tell Jane how he feels. They soon get interrupted by the cops showing up, but decide to walk home together. As the weekend begins, the new friends start to hang out, as well as discuss their relationship… And their virginity. Dave becomes more and more interested in Aubrey, and she reciprocates. Even though she is involved with Roni (her soon to be ex), she has trouble denying her true feelings for Dave. There is one problem, however, Dave is going off to college in another city. Aubrey still has one year left of high school. Will they be able to handle a long distance relationship? Is their love strong enough? Or will Dave chose Jane, the girl of his dreams instead.

The First Time seems like a film that would be as redundant and as vacuous as the title it boasts, when in retrospect, it’s a rather complete film. A very surprising one at that. It’s talky, moving at a slowburn pace, which is a blessing, especially in this genre, open to showing human characters function in a strange world, and deep in its focus on two characters that do more than meet-cute – they stay cute. They also make it easy to like them since they’re sincere and just as confused as we were as they quickly wander out of adolescence before they even felt like they were in.

The film opens with Dave (Dylan O’Brien), a senior in high school, rehearsing lines in a back alley during a party that he plans to recite to Jane (Nickelodeon’s Victoria Justice), a close friend he has big feelings for. He is overheard by Aubrey (Britt Robertson), a Junior in high school, who’s friends are the party in the house next door. They have a nice, intimate discussion about relationships and crushes, and Aubrey even gives him some rather harsh constructive criticism on his letter, which she says is rambling and petty and isn’t likely to sway her feelings at all. Despite this, Dave continues talking with her and they dance preciously in the alley until the party is raided by police.

They then decide to go to Aubrey’s home, where they listen to vinyl, drink wine, and sleep together on the bed innocently enough, despite Aubrey making clear that she has a boyfriend. The next morning, Aubrey, in a freaked-out state-of-mind, forces Dave out the window, reminding herself not only that she has a boyfriend but pretty strict parents as well. This sets up a tone for the weekend.

What follows is Dave’s attempts to connect with Aubrey, avoid her preachy and overly-clingy boyfriend Ronny (James Frecheville), and receive advice from his pals Simon (Craig Roberts) and “Big Corporation” (LaMarcus Tinker), all in the span of one weekend. It isn’t hard to figure out where this will lead, as the title pretty much blatantly gives it away. This will be the first time both Dave and Aubrey have sex, which they discover isn’t as exciting or as easy as they thought; one of the most charming additions to The First Time. The film never leaves the ground of reality, and even during the scenes of the party, never do we feel that director Jon Kasdan is attempting to perpetuate raunchiness between characters or force situations onto them. The dialog (also by Kasdan) remains controlled, yet so alert that you would think it’s done in a form of improvisation.

The leads are especially likable, as well, giving the film an elevation in the character-department, which is what many teen comedy-dramas struggle to create. While these characters may be a bit too eclectic and distinctly-drawn for some audience members to connect with, they are nonetheless interesting and made likable by their innocent, judgments, and their chemistry. Dylan O’Brien and Britt Robertson do wonderful work as teens caught up in the mixed-signals and adolescent nature of relationships, crushes, and insecurities. Victoria Justice is a pleasant addition to the cast, but those looking for her as a character worth putting on the poster will be disappointed; she is allotted, maybe, ten minutes of the whole project. But in those ten minutes, she says a few things that give you the indication why this project wasn’t backed by Nickelodeon. Regardless, I laud her for trying new territory; sign her up for a Harmony Korine project next.

There are different levels of teen films in 2013. They can excel to nearly unobtainable levels of masterworks like The Breakfast Club or The Perks of Being a Wallflower, steady their sights on competence and energy and be something like Drumline or Little Birds, or could go in the dumpster along with Girl in Progress and the wretched Project X. The First Time may be, at times, predictable, fluffy, and too eclectic for its own good, but it gets by on charm, character-charisma, and slick writing. Unfortunately, it’s something that will unfortunately go predominately unseen by teenagers. 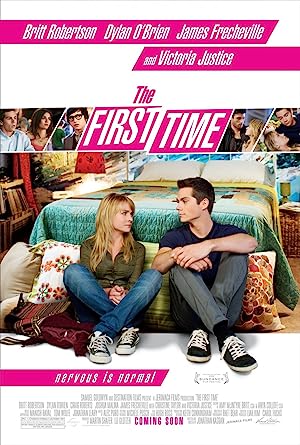 Be the first to review “The First Time 2012” Cancel reply