During an outbreak of a deadly plague, a mystical woman must save her tight-knit Jewish community from foreign invaders, but the entity she conjures to protect them is a far greater evil.

Horror is a tricky genre to get right, especially since it has so many facets itself, providing a rich tapestry for its fans. The Golem seeming to wish to evoke the feeling of one of the Universal classics of old, yet failing to do so on many levels.

The majority of this failure seems to lie somewhere between the writer’s desk and the editor’s room, as there often seems to be a lack of explanation for events. Which in turn makes it feel like they were there initially and then edited out. For example, at a mid-point in the film the female protagonist, Hanna, tells her husband that the golem likes music. Yet, we never seem to have been given any evidence of that fact.

If this only happened once, it could be forgiven, but actions and sentences like this occur throughout the movie. With other unforgivable moments, including Vladimir, shooting at the golem multiple times in quick succession with his flintlock pistol. Something which caused the audience to laugh at a moment which was meant to provoke tension, causing a distraction and breaking the engagement, The film also having odd moments of extreme gore which seem slightly out of character with the rest of the movie.

Which is a shame, as many other elements in the movie work well, including the main female lead, cinematography and general direction throughout (Never have plague doctors been used so meanicingly). Leaving the real failing of the film being the dialogue, which is often trite and clumsy.

The Golem would probably have been improved if they had steered away from the named monster and created something completely new instead. As this would have given them more freedom to develop the situation, but what is left is confused and feels unfinished, making it one of those horror films which will be enjoyed for its failings, rather than its creepiness. 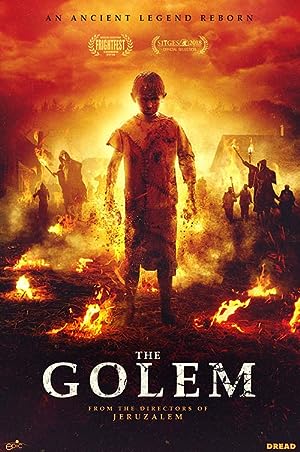 The Golem (2018)
95 min|Horror|05 Feb 2019
6.1Rating: 6.1 / 10 from 1,484 users
During an outbreak of a deadly plague, a mystical woman must save her tight-knit Jewish community from foreign invaders, but the entity she conjures to protect them is a far greater evil.
Director: Doron Paz, Yoav Paz
Creator: Ariel Cohen
Actors: Hani Furstenberg, Ishai Golan, Brynie Furstenberg, Lenny Ravich