1327. After a mysterious death in a Benedictine Abbey, the monks are convinced that the apocalypse is coming. With the Abbey to play host to a council on the Franciscan’s Order’s belief that the Church should rid itself of wealth, William of Baskerville, a respected Franciscan friar, is asked to assist in determining the cause of the untimely death. Alas, more deaths occur as the investigation draws closer to uncovering the secret the Abbey wants hidden, and there is finally no stopping the Holy Inquisition from taking an active hand in the process. William and his young novice must race against time to prove the innocence of the unjustly accused and avoid the wrath of Holy Inquisitor Bernardo Gui.

I’ve been enjoying films for 20 years now, and this is the first comment I’ve put on any film website. I’ve always had the mickey taken out of me for loving this film, and it’s right up there amongst my favourites of a very eclectic bunch. Why? Well, firstly and I have to say, very importantly, it’s taken from the finest piece of modern literature I’ve read. Umberto Eco’s novel has such mammoth scope of subject matter and detail, it is was always going to be extremely hard to put into film (Dune anyone??), and Annaud certainly doesn’t succeed in every way, but my lord he gives it a damn good go. The film quite rightly focusses on the human story within the book of a group of murders committed at an Italian abbey in the 14th Century, and the ongoing search for the purpetrator, by a Franciscan monk and his apprentice. The book encompasses many other issues and plotlines, which could not be fitted into the film. The three screenwriters do an excellent job, of filming the almost impossible to within 2 hours or so. Most importantly to me, the cinematography and set are sublime, almost unsurpassed in modern film to my mind, and still to this day amazing. I’ve always found that many non movie-lovers remember this film, for good or bad. The main reason for me is that it recreates so impressively the period it represents. Tonino Delli Colli, I salute you. The production team deserves a similar merit for bringing together what was in essence an European co-production, whilst not forgetting the biggest exterior set built in Europe since “Cleopatra”. Step forward Dante Ferreti. I salute you too. 0.1 of a mark off for the editing, but let’s not dwell on that. The acting is, bar none, marvellous, with even Christian Slater in his first main role putting up an extremely decent stab of being an apprentice monk.

I like a good whodunnit, but I adore a whodunnit which throws in the visual magnificence of a different age, top notch performances, a script taken from a extraordinary source, and assured directing. 10 out of 10, and my mates can carry on taking the mickey out of me.

So in summary, I’ll leave it to the director himself.. `When I see a film, I love it when I’m entertained, when I care for the actors, when I share their emotions, when I’m scared, when I’m in love, but also if I learn a little something, if I have the feeling that I haven’t seen something before, and that’s what `The Name of the Rose’ has.’ 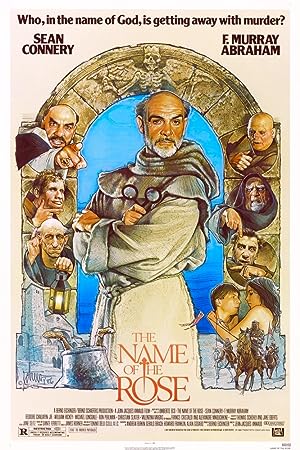