A mother concerned about her young son’s disturbing behavior thinks something supernatural may be affecting him.

Always down for a horror film no matter what. The trailer for The Prodigy was intriguing though its one of those cases where it should have shown less, less is more for this one. That jump scare that ends the trailer would have been fantastic if we didn’t know it was coming in the theater. Anyways, this film has things going for it in the beginning and starts off intriguing before degenerating into a mess.

The film is about an eight year old boy named Miles. Initially, his parents believe him to be gifted but they soon realize that something is off about their son. His actions become bizarre and border on psychopathy. It turns out Miles is possessed with the reincarnated spirit of a deranged serial killer who died at the same moment that Miles was born. His parents must figure out what to do to set their son free from the evil that has embodied him.

There’s an intriguing premise here. The kid actor on display as Miles is good, and Taylor Schilling is as well. The film doesn’t offer so many jump scares as I thought it would from the trailer and is driven in its plot. The mood and tone set up at first really works. I’d say the last quarter of the film is where it goes to hell. When the endgame and the progression towards it is revealed, I really lost interest.

The character motivations and actions are also extremely idiotic. To the point where I wanted to curse at the screen in the cinema. The film needed to arrive at its conclusion in a way that kind of respected the build up and quality of the beginning. Still for horror seekers who aren’t too critical, this could be something to enjoy. 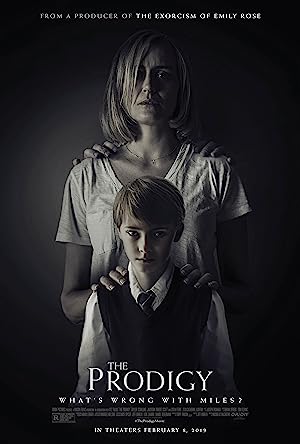 Be the first to review “The Prodigy 2019” Cancel reply