Inspired by the true story of Ireland’s biggest cocaine seizure in 2007, The Young Offenders is a comedy road movie about best friends Conor and Jock, two inner-city teenagers from Cork who dress the same, act the same, and even have the same bum-fluff mustaches. Jock is a legendary bike thief who plays a daily game of cat-and-mouse with the bike-theft-obsessed Garda Sergeant Healy. When a drug-trafficking boat capsizes off the coast of West Cork and 61 bales of cocaine, each worth 7 million euro, are seized, word gets out that there is a bale missing. The boys steal two bikes and go on a road trip hoping to find a missing bale which they can sell so as to escape their troubled home lives….But Sergeant Healy is in hot pursuit.

Really enjoyed this film. It’s always good to see an Irish film that is not directly targeting an overseas audience. it’s been made with genuine Irish actors, with accents from the counties where the film is made, adding to the feeling that this really is true to the story. The two main actors are brilliant and very believable. The viewer is not bogged down by morality even though there is a darker subtext it is shown in a light hearted way, and to add context to the story rather than just elicit sympathy. Having some insight into the background of the boys does give a good insight into why the boy would want to steal the drugs and their naïve plan is charming in its own way. Give this film a go. 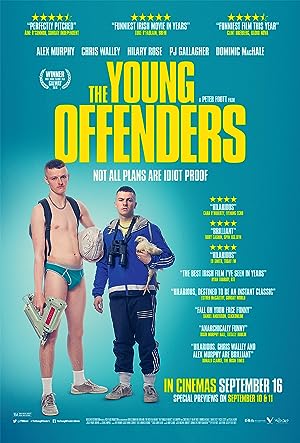 1 review for The Young Offenders 2016