This Is My Body 2001 with English Subtitles

Young student Antoine is at a crossroad in his life. He wants to jump off studies shortly before exams, and are not keen on taking over his fathers firm. Instead he wants to follow an acting career. He is offered a big chance in a main role as the female directors second choice, and after a small quarrel with his father, he takes the job, which men h quits school of nine weeks of filming. As a star he researches why the first choice of an actor, Lucas, was perfect for the role, being gay in a gay role. He finds out that the director has lied to him. Lucas killed himself due to complications after episodes with the director, which was wildly in love with him, despite his sexual prefer action. But Antoine doesn’t get much from contacting her, getting all kinds of mixed signals as her leading role. Talking to the father, or the girlfriend isn’t working for him at his crossroad. And his father cuts him short when he get to know he has signed the film contract. Running off from his father and girlfriend he seeks to stay over at the directors place, though he’s warned about her.

“Ceci est mon corps” (“This is My Body”) is worth watching but only for Louis Garrel fans. The story is quite pretentious in trying to make a poignant statement on how to get over bad things in life such as family problems and girlfriend/boyfriend relationships and more.

We met Antoine (Garrel) a college student trying to make his own path in life abandoning his studies to become an actor after being chosen to be part of a film. The film’s director and screenwriter Louis (Jane Birkin) has cold feet about Antoine selection as the substitute actor, after the one she wanted, Lucas, the perfect guy for the role committed suicide after some emotional problems that involved herself, deeply in love with him, and his boyfriend. Later on, Antoine will be divided in working on the film; his relationship with his girlfriend (Melanie Laurent); his family wishes to keep him studying, since he’ll be the head of his father’s company; and the attention of the problematic director, who seems to be caring for this guy while trying to forget Lucas, the angel of her life.

Nothing is solved and nothing is developed here that we might haven’t seen in another movie; the presentation is good in parts, it gets confusing and unexplained in the ending. Perhaps this was a story about taking wrong choices and not being able to correct them when all you had was a good path that you shouldn’t walked away from it. If Antoine had stayed with his girlfriend, forget about movies and being an actor and keep with his education as his family wanted he wouldn’t suffered, but he also wouldn’t experienced things and wouldn’t know much about life. This message isn’t clear or even worst the movie might don’t have a purpose.

To lighten up things and make you want to watch this film I loved Garrel’s acting, he’s a real talent doing the difference out there, literally taking challengeable roles and here he’s very good as the troubled main character. The other aspect that I loved about this film is how predictable the movie gets in its quotes. A couple of times I knew exactly what the characters would say to each other, it’s like deja vu, and this didn’t bothered me, I found it entertaining, almost feeling like what the characters were thinking, feeling like a complete Professor Xavier and this had me laughing for a while. 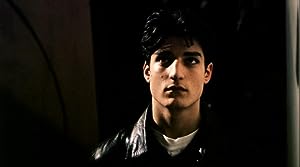 This Is My Body (2001)
87 min|Drama|29 Aug 2001
5.4Rating: 5.4 / 10 from 133 users
Young student Antoine jumps off studies to follow an acting career, and is offered a main role after a boy who killed himself after a fling with the director.
Director: Rodolphe Marconi
Creator: Rodolphe Marconi, Gilles Taurand
Actors: Louis Garrel, Jane Birkin, Elisabeth Depardieu, Mélanie Laurent

2 reviews for This Is My Body 2001 with English Subtitles