Jasin and his vampire brood’s time is running out. In order for them to survive, Jasin needs to find a mortal to turn into a vampire to spend eternity with. Los Angeles provides plenty of young candidates. The brood has their eyes set on Tara, a young, gorgeous blond college student. Tara is open to the idea of becoming a vampire, but someone else enters the picture to disrupt the brood’s plans. Caleb, a fresh face college student new to Los Angeles, keeps dreaming of a mysterious stranger. At school, Caleb meets the stranger, Jasin, and they have an instant connection. The problem is that time is short, and Jasin needs to convince Caleb that eternity as a vampire can be a very sweet life.

Before watching this movie, I read all the reviews on this site, and I had very low expectations for this film when I watched it. If you’re looking for a horror movie, I don’t even understand why you’re still looking at this page. This film is sort of a *GAY* parody of Twilight( minus the sparkles); Jasin is like Edward and Caleb is the Bella. The movie sometimes had slow or dull dialogue; sometimes it was good like that, sometimes not so much. In a nutshell, it wasn’t a horrible movie, quite entertaining actually, if you’re game for what this movie has.

This movie is not for a true vampire fanatic. This is movie is better for ones who don’t mind bending the rules a little. 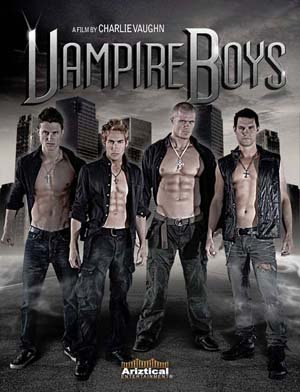