In a world difficult to comprehend, Nathan struggles to connect with those around him – most of all his loving mother – but finds comfort in numbers. When Nathan is taken under the wing of unconventional and anarchic teacher, Mr. Humphreys, the pair forge an unusual friendship and Nathan’s talents win him a place on the UK team at the International Mathematics Olympiad. From suburban England to bustling Taipei and back again, Nathan builds complex relationships as he is confronted by the irrational nature of love.

‘I think I see the world differently to others’ explains Nathan, played by Asa Butterfield. The distinction causing this however is that he is has been diagnosed with Autism, which passes the conclusion that he is socially awkward, shy and ‘unique’.

Although considered disabled, Nathan is a maths-prodigy. A self- confessed, algebra loving whizz at that. Because of his advanced capability in the subject, Nathan joins a high-school a few years early and placed under the teaching of Raff Spall’s character, Mr Hutchinson. Heading into early stages of MS, Hutchinson explains to Nathan a competition that he did in his youth and recommends he should enter it

the International Mathematics Olympiad, a world- wide competition
similar to sporting, but rather than strong muscles, strong brains.

Chosen as one of the sixteen entries from the UK, he then joins a worldly-mix of other competitors in what is probably the most difficult children’s test in the world.

At this point you realize how the story is going to end, along with the regular clichés. But X+Y keeps you on toes and raises the grade to unexpected.

Although X+Y is focused around maths, it doesn’t matter. The subject could easily be replaced or removed and the film would hold strong by because in awe of the fundamental driven narrative. Put into cheesy maths terms X+Y is: Great casting + dramatic story + comedy – clichés = success.

Taking the on the central lead, Asa Butterfield (Ender’s Game) stuns in the portrayal and authentically attaches us with emotion to his story. Co-starring as Nathan’s mother, Sally Hawkins also gives a stellar performance.

Crafted with flashbacks, X+Y is very much about the destination as well as it is the journey. Comparable to A Beautiful Mind, this too is a prodigy excellence and a charming feature from Morgan Matthews. 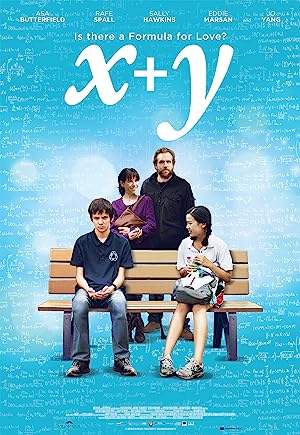