Gene and Finny are two boys who are best friends living in 1943, at the height of World War II. The idea that the boys will most likely be drafted when they turn eighteen is surrounding them, and they are practically forced to live their lives to the fullest. The two boys attend the Devon School, which prepares them for military life that they will most likely be subjected to. The film begins with a narration by an older Gene, traveling back to Devon some years later. The thing he wishes most to see is the tree, which had a great effect on the boys’ lives.

Ok, I read the book too, but that was in – oh say- 1964 and I forgot it all. But the movie worked for me on its own merits. First of all, how many movies today are all about groups of 17 year old guys. Gone are the all-male schools and seminaries of the past. So it’s a nice window onto a vanished (mostly, I think) subculture. Naturally someone in our own decade is going to read “homosexuality” into the relationships, but there was, in fact, a time when Finney could say to Gene “in this teenage period of your life, the best person to come to the beach with is your best pal, and we believed him. The cinematography was beautiful, even lyrical. I think the character of Finney was very well portrayed by John Heyl and wonder what ever happened to him. We know what happened to Parker Stevenson (he married Kirstie Alley). All in all, a succesful evocation of a time and place, whether or not it measured up to the themes and meanings of the book (which I note Leonard Matlin called “overrated” anyway. 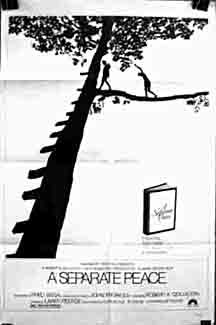 A Separate Peace (1972)
104 min|Drama|27 Sep 1972
5.3Rating: 5.3 / 10 from 392 users
Gene and Finny are two boys who are best friends living in 1943, at the height of World War II. The idea that the boys will most likely be drafted when they turn eighteen is surrounding …
Director: Larry Peerce
Creator: John Knowles (novel), Fred Segal
Actors: John Heyl, Parker Stevenson, William Roerick, Peter Brush