In the comedy-drama Cas, Pepijn and Sjors’ steady, seven-year relationship is shaken up after they allow a young student named Cas to sleep on their couch until he finds a place of his own. Gradually, both men fall head over heels for Cas’ laconic charm and it forces them to reconsider their many long-term plans. Is Cas’ presence endangering their relationship or is he actually a blessing in disguise?

Don’t let the subtitles scare you away: At less than an hour, the Dutch film “Cas” is well worth your time and would be even if it ran twice as long.

Pep (Wieger Windhorst) and Sjors (Kevin Hassing) are a sweet, committed couple. Though still young, they’ve been together for years; now they have set about making preparations for two big projects: A trip around the world and parenthood.

The first requires that Sjors — the more corporate of the two — take time off work. A lot of time. Up to half a year, in fact. But Sjors has a hard time conjuring up a lot of excitement for the jaunt; he’s already traveled extensively, and now he’s more focused on his career than his next adventure abroad. He’s also keen to become a father, assuming that their friend Mia (Yootha Wong-Loi-Sing) will agree to surrogacy.

That’s where Pep may not be quite so eager. He worries that Mia will take umbrage at the request, but — like Sjors when it comes to extended travel — he seems more reluctant to make the ask than he would be if it were something he was more certain about. Though it’s only hinted at in the dialogue, Windhorst conveys Pep’s underlying fears and insecurities. He’s not ready to be a dad yet, and in part that’s because he’s not entirely sure of his relationship with Sjors.

These fault lines in their relationship are all but forgotten, at least for a time, when Sjors brings home a Grindr hookup named Cas (Felix Meyer), a younger man just starting to figure out what he wants. The idea is for Cas to stay on the sofa for a couple of nights until he can work out other housing arrangements; when the couple of nights becomes a couple of weeks, the three guys go through a not-entirely-unexpected dance of attraction, jealousy, and resentment that leads to a couple of three-ways and a major re-examination of what Sjors and Pep want… and with whom.

By turns funny, sweet, hot, and tender, the film is perfectly cast and well acted by a cast with great onscreen chemistry. “Cas” packs a complete package into its brief runtime. Writer Bastiaan Tichler and director Joris van den Berg deliver a truthful take on a relationship while also providing an adventure that Pep and Sjors don’t have to leave home to enjoy. 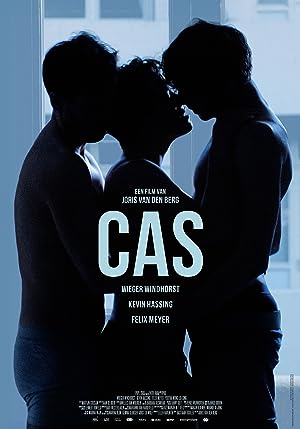 Cas (2016)
50 min|Drama, Romance|01 Sep 2016
6.6Rating: 6.6 / 10 from 117 users
In the comedy-drama Cas, Pepijn and Sjors' steady, seven-year relationship is shaken up after they allow a young student named Cas to sleep on their couch until he finds a place of his own….
Director: Joris van den Berg
Creator: Bastiaan Tichler
Actors: Kevin Hassing, Wieger Windhorst, Felix Meyer, Yootha Wong-Loi-Sing