Three upper-middle class teenagers start a night of partying, including wild sex, rape, drugs, and accidental murder. Fun merges with violence with absurd, tragicomic results. The more they try to cover up their goof ups, the more complicated their lives become.

“Cama de Gato” shot with practically no money, is the first feature lenght film from director Alexandre Stockler, and it covers one wild night in the life of three teenagers and the terrible consequences arisen from their what they consider “fun”.

While the necessity of such a film is dire, and it its pacing and mise én scene works remarkably well for such a small picture, the lack of preparation the actors had great hurts the experience.

The portrayal of the three teenagers is stereotyped, bi-dimensional, unrealistic and even childish at times. The three are rarely believable, including the experienced Caio Blat.

One again, this film shows us how Brazil is filled with courageous and creative Directors, who unfortunately don’t pay enough attention to the acting in their films. This is a prime example of why “City of God” appealed to so many and why other films don’t.

Overall, a worthy attempt. I shall be patiently waiting for other films related to the TRAUMA manifesto. 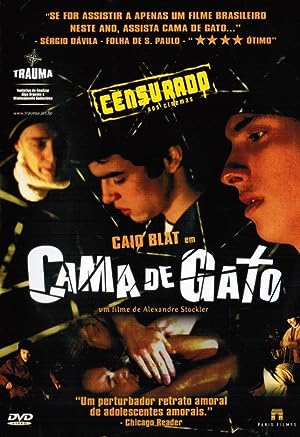