Jakob is stuck in the transition between his teenage years and adulthood, still uncertain about what to do with his life, constantly hanging around with his friends and some girls, partying hard but not feeling quite alright. His only way to deal with life and cope with things is to film everything and everyone around him, whether being events of small importance or even things that shouldn’t be seen by his intrusive camera. What possible consequences this experiment may have in his life and his attitudes?

I’ve just seen the film Egoshooter with Tom Schilling in the leading role. In Germany Tom Schilling got famous in the film Crazy, an autobiography of a handicapped teenager who goes to a boarding school. After that he had many roles in teenage movies and TV shows. But he has never played a real big part although he’s a brilliant and authentic actor. The story line of Egoshooter is told fast: Jacob, a 19 year old boy, films himself and documents everything: taking the train, drinking and smoking, having sex, taking a shower, burgling,… It’s a video dairy of a boy who doesn’t seem to have perspective in his life. As his life, so the film. In circa 70 minutes Egoshooter gives an insight to Jakob’s life that led me dose off. I was really thankful that I hadn’t to see more of it. I think I wouldn’t came through it. Summarizing it’s an absolutely boring film with an actor who is the best in his age. 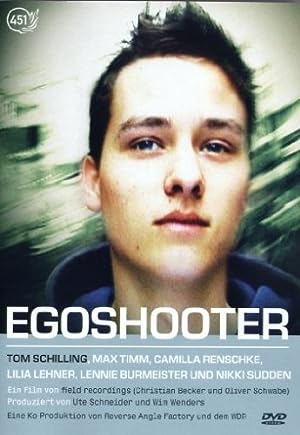 Egoshooter (2004)
72 min|Drama|24 Feb 2005
4.8Rating: 4.8 / 10 from 192 users
Jakob is stuck in the transition between his teenage years and adulthood, still uncertain about what to do with his life, constantly hanging around with his friends and some girls, partying…
Director: Christian Becker, Oliver Schwabe
Creator: Christian Becker, Oliver Schwabe
Actors: Tom Schilling, Camilla Renschke, Max Timm, Lilia Lehner

Be the first to review “Egoshooter 2004” Cancel reply