Fit, young and handsome Pete has the whole world at his feet. Like many other guys his age, he has a dream, and he’s willing to pursue it. Pete arrives in London with the hope of increasing his business as an escort. When Pete meets London boy, Kai, a fellow escort on the scene, romance blossoms. But while Pete can easily separate his job from his love life, Kai has a harder time sharing his boyfriend with clients. Both men want different things from life but at what cost?

This is one of the worst things I ve ever seen. It tells you nothing about male prostitution. the characters are so vacuous as to be completely uninteresting, they have nothing of any interest or intelligence to say. There’s no insight into the motivations of the clients. A bunch of rent boys hang out in a flat, take some drugs, have a bit of sex with one another. the Greek Pete of the title wins an award for dead battery of the year in Los Angeles and comes back to London. Thats about it. It is a disgrace something as appalling as this did the rounds not just of the London Lesbian and Gay Film Festival but has been inflicted on screens across the UK. Don t bother wasting one hour plus of your life on this. Please. Don’t. 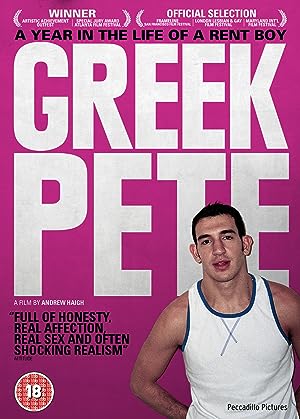