This movie is based on actual events, but it says it is not all about one specific incident. It documents St. Vincent’s Orphanage in Canada, where many of the boys suffer physical, emotional, and sexual abuse at the hands of the brothers who run the facility. When the stories are surfaced and a police investigation is begun, religious and political groups work to silence the story to keep it from reaching the public.

This is an expertly produced film that’s truly scary. With its subtle, realistic acting, the situation at the orphanage comes across as chilling, nauseating, and so very, very sad. Henry Czerny gives a stunning, expertly controlled performance as the psycho priest, and what was especially interesting to me was the way in which his character was explored in Part II, set 15 years after the abuse. A dramatist I once knew said that a writer should give “every dog his day in court,” meaning that it’s far more effective if a villain is shown to have some redeeming qualities or is given a chance to explain their actions. (They’re supposed to be actual human beings who believe in themselves and their choices, no matter how sick, after all.) This film differs from the similarly themed “The Madgalene Sisters” in that the sadistic clergy members in that film were painted as black and white monsters. Brother Lavin is clearly a torn man (he weeps while kissing the boys) with probable abuse in his own past, and he’s clearly very confused about what love is and is not. This in no way makes his actions acceptable on any level, but it does bring the viewer deeper into a textured situation. I also thought it was brave for the filmmakers to not shy away from frankly depicting the scenes of abuse. The young actors are not exploited or eroticized, but you do see them in the shower with soap suds dripping down them, etc., and since this is a film about a stark sexual situation, not simply cutting away from the physicality of its world makes it all the more more powerful. (Your skin crawls but you can’t stop watching, and you truly get a sense of what these orphans are going through.) It’s frightening to think that orphaned children are at the mercy of twisted institutions such as this…and sadly, always will be. An extremely memorable film that you’ll only want to see once. 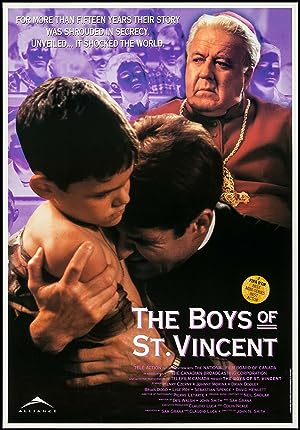